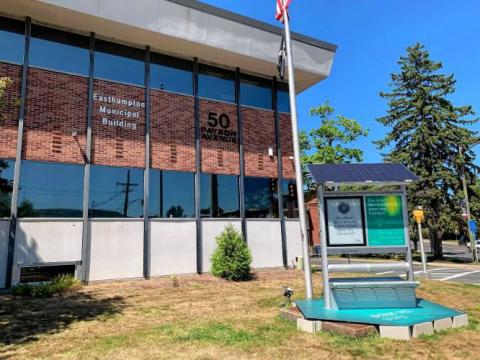 EASTHAMPTON — Have you ever been running errands when your cellphone suddenly runs out of battery? A new solar-powered bench doubling as a charging station in front of the Easthampton Municipal Building provides a solution.

For a one-month demonstration project at 50 Payson Ave., the city of Easthampton has partnered with Solstreet to install the solar-powered outdoor bench, which is fitted with six USB charging ports, LED graphics and a E Ink digital update board for city announcements.

“I’ve been looking and talking to businesses and constituents on ways to communicate more effectively what’s going on in the city,” said Mayor Nicole LaChapelle, who said she was approached by the company for a demonstration. “I wondered if this would have some impact.”

LaChapelle said the project did not cost the city any money to install or operate.

No city announcements have yet been posted on the board, but LaChapelle hopes the city will begin advertising events starting Wednesday. She said the rollout of the board was tied to the Millpond Live concert series beginning Friday, which brings four concerts to Millside Park over four weeks.

LaChapelle said the city was looking to place the bench in an area that had both pedestrian and slow vehicle traffic.

Having a completely solar-powered piece of technology is a thoughtful way to show commitment to green energy, LaChapelle said.

The bench is scheduled to be removed on Sept. 20, LaChapelle said, but the city might keep the bench or expand to more locations.

“After the month is done we’ll take a look at the cost-benefit analysis and feedback from the public,” she said.

Based in Brooklyn, N.Y., Solstreet is 100 percent woman owned and provides solar benches to areas through purchase, leasing and revenue-sharing options, according to a company statement.